Free Shipping On Orders All Orders Over $120

Creatine is an organic compound that can be found naturally in your muscle cells. While your body can produce creatine, it can also be found in:

The purpose of creatine is to help supply energy to your cells, specifically your muscles during intense exercise.

The benefits of creatine supplements make it very popular in the athletic world. It is typically used by athletes to enhance their performance, increase their muscle mass, and increase strength. Creatine has also been found to alter specific cellular process that help to increase muscle mass, strength, and recovery.

There are a lot of health claims associated with creatine supplements, and you may be wondering if they are all true. Here are 5 science-based benefits of creatine.

HELPS TO PRODUCE MORE ENERGY IN YOUR MUSCLE CELLS

According to a study published in the Pharmacology Review, creatine supplements help to increase your muscle’s storage of phosphocreatine, which is a form of stored energy in your body. Phosphocreatine aids in the formation of ATP, the main molecule your cells use for energy.

During intense workouts, ATP is broken down by the body for energy use. In normal circumstances, your body naturally uses ATP faster than it can reproduce it. However, since creatine supplements increase phosphocreatine stores, it allows your body to produce more ATP to fuel your muscles during exercise.

The additional energy production can lead to improved athletic performance.

Aside from producing more energy, the use of creatine supplements to increase muscle mass is probably one of the popular and effective uses of this supplement. According to several studies, creatine supplementation can modify several cellular pathways that ultimately leads to muscle growth.

According to the International Journal of Sports Nutrition and Exercise Metabolism, creatine can enhance the formation of proteins that create new muscle fibers. This leads to new muscle growth, and increased muscle mass.

Research has found that taking creatine supplements for just 5-7 days can result in significant muscle size increase as well as lean body mass. Though the initial increase in size is due to increased water content in your muscles, over a longer period it does aid in the growth of your muscle fibers.

Studies have found that creatine supplement can increase muscle strength by 5-10% when accompanied with a weight training program.

IT’S SAFE TO USE

Creatine is the most well researched supplement in the world. There are numerous studies that document the effectiveness as well as the safety of both short-term and long-term use.

What’s more, is that a research review comparing the most popular sports supplements concluded that creatine supplementation is the best one available due to its inexpensive price, safety, and athletic advantages. Creatine supplements are widely available. However like any supplement, it is important to know your source to ensure you are getting the best ingredients.

WHEN TO TAKE CREATINE

Using creatine supplements is very easy to do. If you choose not to do a loading phase (more on this later), simply consume 3-5 grams of creatine daily. While the dose of creatine supplement is clear, there are a lot of myths about when you should take it. There are three main time frames that are highly debated, this includes pre-workout, during your workout, and shortly after your workout. Luckily there is a ton of science-based research done on this topic, and the answer may surprise you.

While there are some studies showing that taking creatine supplements before or after your workout is the most beneficial, there isn’t a lot of research to support either theories. In fact, based on research, the results are mixed, and the best time to take creatine isn’t entirely clear.

A 2017 review article found that taking creatine supplementation during exercise is effective for increasing lean tissue, as well as upper and lower body strength, in older adults. However, research that is based on an overall population suggests that the optimal time to take creatine supplementation is either shortly before or after your workout, with an emphasis on the “shortly.” If you would like to cover both of your bases, try splitting your creatine dose in two, and take one half of the supplement pre-workout and the other half post-workout.

During a creatine load, you typically consume a large amount of creatine in a short period of time in order to saturate your muscle stores, 20-25 grams per day. These servings should be broken down into 5-gram servings throughout the day.

After the loading phase is over, maintaining your creatine stores can be done by taking a lower dose of 2-10 grams daily. Absorption of creatine may improve by pairing it with a carb-based meal.

Therefore, though it is possible to fully saturate your creatine stores using a lower dose, it will take several weeks before any real benefits are seen. Creatine loading is the fastest way to reap the benefits of supplementation. Research has found that creatine loading can maximize your stores in one week or less. As a result, you will be able to optimize on the benefits of creatine supplementation that much sooner. Benefits of maximizing your creatine stores include:

Creatine is a widely studied supplement, and research continues to confirm the effectiveness, as well as the safety profile. Currently there is no evidence that suggest creatine supplements cause any adverse effects or conditions.

If you are looking for ways to increase the effectiveness of creatine supplementation, try taking your supplement with carbs. While researchers have studied the effectiveness of adding several ingredients such as protein, cinnamon, and amino acids to increase absorption, the ingredient that has the most promise is carbs. Several studies have found that taking your creatine supplement with carbs increases the amount of creatine absorbed by your muscles.

According to a study published by Buford et al, adding carbs to a creatine supplement may increase muscular retention of creatine. Penn State University notes that by increasing creatine storage levels, you may also increase your muscle glycogen levels as well. The combination of increased creatine and glycogen in your muscles allows athletes to enhance their aerobic exercise, strength, and stamina.

It is important to note that there are some other studies that have found no performance benefit to taking carbs with your supplement. It seems that athletes who are participating in a combination of exercises such as sprinting, aerobic exercise, and strength benefit the most from combining their creatine supplement with carbs. Athletes participating in specific sports such as soccer, basketball, and wrestling may particularly benefit from adding carbs to their creatine supplement.

Creatine is one of most affordable, most effective, and safest supplements that you can take. There is a vast amount of research that shows the effectiveness of this supplement, especially for athletes. Out of all the forms of creatine supplements out there, creatine monohydrate is the most effective nutritional supplement currently available for athletes. Not only is this supplement safe, but it is proven to help athletes increase strength, lean body mass, enhance athletic performance, and even help prevent injury.

Q: HOW MUCH CREATINE SHOULD I TAKE?

Q: HOW TO LOAD CREATINE?

A: Loading phases consists of intaking 20-25g of creatine per day for a week.

Q: HOW TO USE CREATINE?

A: Our Favorite is alchemy labs CreAbsorb and can easily be swallowed as it is in pill form so you don't have to worry about any unpleasant tastes in your shaker or mouth. Our athletes are also known to take manifest Creatine HCL which mixes in their PRE or BCAAs before training or to their POST after training when in the loading phase.

Q: WHEN SHOULD I TAKE CREATINE?

A: Research has shown some evidence that supports creatine intake pre-workout, during workout, as well as post-workout. The key to creatine intake is to keep your creatine stores consistently high in order to reap the benefits.

Q: DO YOU NEED TO CREATINE LOAD?

A: Short answer NO. Long answer...loading phases are a faster way to increase the creatine stores in your muscles. Loading phases consist of intaking 20-25g of creatine per day for a week. Suggested daily intakes of creatine are 5g. Your muscles can still achieve complete saturation, however it will be a slower process of about a month.

Q: DOES CREATINE NEED TO BE CYCLED?

A: No, creatine does not need to be cycled. Typically, when you cycle on and off of a supplement, you're doing so because your body is developing a tolerance to the said supplement. Since your body naturally produces creatine and will continue to produce creatine even with supplementation, your body does not create a tolerance or sensitivity to creatine, meaning a cycling period is unnecessary.

Q: SHOULD I TAKE CREATINE ON REST DAYS?

A: Yes, you should still supplement with creatine even on rest days to keep the creatine stores in your muscle saturated in order to start seeing benefits. Whether you are loading or supplementing with a daily serving of 5g, consistency is key in order to maintain saturation and reap the benefits.

Q: WHAT HAPPENS WHEN YOU STOP TAKING CREATINE?

Q: IS CREATINE FOR ME? SHOULD I BE TAKING CREATINE?

A: Yes! Creatine has been scientifically proven to support energy production in muscles, muscle growth, lean muscle mass, muscular endurance, as well as explosiveness and power.

Q: DOES CREATINE CAUSE HEADACHES?

A: Short answer...NO. Dehydration is the key factor in individuals that are experiencing headaches, no matter what supplements are being taken. When supplementing with creatine, your body's need for water increases, however if you are not taking in adequate amounts of water, chances are you will become dehydrated, which causes the headache.

A: YES! Creatine is the most widely researched supplement on the market. In a 21 month consecutive study of long-term creatine supplementation, Creatine was found to produce no ill health effects.

Our CreaAbsorb by alchemy labs. It is flavorless, odorless, and easily dissolvable, making it easy to add into your working regimen. Try out our creatine supplement to see how it can improve your athletic performance. *Shown Below* 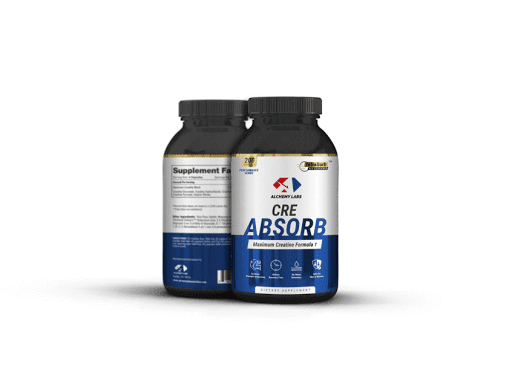 Not happy with your order? chat with us and lets resolve it!

We are here to help you!

We do not store any payment info!